The VAN TOUR THAT WASN’T

“OK, hold up. Foo Fighters played shows in 2020? With the pandemic and everything else going on?”

Well. No. Crazy story that. In 2018 I was fortunate to get to design my first poster for Foo Fighters, for their Milwaukee date. They remembered my work and came back around in January 2020 to tap me to work on a gigposter for a planned 25th Anniversary tour. The idea was that they’d pay the same dates as their 1995 tour.

Dubbed “The Van Tour”  in honor of the red Dodge extended van that has since become a major part of the band’s lore and legend, it was set to pop off in late spring 2020.

Sadly this was 2020, so nothing was going to work according to plan. The dates got shifted and rescheduled due to the Covid 19 pandemic before ultimately getting canceled altogether. This was after a number of artists (myself included) had submitted and gotten final approval on our designs. Sad situation but out of everyone’s hands. Perhaps it would work for an Abuquerque date sometime in the far-off future whenever things get back to normal.

After all what’s a gigposter without a gig? We’d just shine it on for now and pick it up again in a year or two.

But then in November, the band had an idea: we’ve all been through a lot this year so what if we just print them anyway? Give people a chance to buy a colorful souvenir of a terrible year.

I was skeptical myself. “Why would anyone want a poster of a show literally no one was at?” Still, I trusted the decision and I was dying to see my artwork made real, so if nothing else there was still that. Color seps were submitted and they were off to the screenprinter.

When I was a kid back in the day, I remember seeing fuzzy textured posters for Star Wars. As a teenager I’d often see “flocked” velvet posters in friends’ bedrooms and at head shops. They were designed to offer the viewer a tactile experience, whether they were under the influence of anything herbal or not. And once you got them under a blacklight, their day glo inks would explode in glorious face-melting bright colors.

This is the effect I wanted. I wanted to sear eyeballs and melt faces.

I always get a little meek when suggesting processes like this since someone always has to budget for it and screenprints arent cheap to begin with. But I pitched it a a kind of “wouldn’t it be cool to…” and luckily the band jumped at the chance to make a real-deal fuzzy Day Glo rock poster. Now it was up to me to live up to the process and make something worthy of being presented that way. So I began my research

This Black Velvet fuzzy effect I’d been wanting to do forever has a name, as it turns out and that name is flocking. I’ve done all kinds of posters at this point, from letterpress to die-cut to day glo, but I’d never done a flocked poster. I didnt even know anyone that produced them.

Enter Cat Palace,a Texas screen printing shop that Live Nation found and lined up to do the crucial (and as it turns out) highly dangerous method of fuzzing up the black layer of the art.

When I started this one, I didnt really know much about Albuquerque, aside from what we’ve all picked up from Breaking Bad. I knew straightway that I was going to avoid a Breaking Bad gag. It’s kinda tired at this point and besides it didnt seem to fit the band. I needed something more specific to the place.

That’s where the hot air balloons came in. Apparently Albuquerque is home to one of the world’s biggest hot air balloon festivals. Hot air balloons have a kind of retro vibe to them, but I didnt want this to look like an Air Supply (google it, kids) so I married the concept with the desert southwest’s UFO sightings and boom, we were in business.

As the band’s  van needed to be worked into the scene, I found a way to make it more of a character, with retracting tires to reveal thrusters, aiming skyward on an infinite highway up toward the mothership as it used its tractor beam to pluck hot air balloons out of the sky. I wanted to make something that felt more like a scene from a movie and less like a concert poster.

To that end, I hid the band name in a billboard, eroded and stripped back to make the band name and city out of the parched remnants of 3 old adverts. Further there would be no “date” on it. The date lives in the license plate, the venue on a bumper sticker, and I even had an alien head finger-drawn into the dust on the van’s back gate. And between the van and ship, an array of Roger Dean-esque floating mountains.

An Easter egg to finish it off

I knew that I wanted to work a roll of Footos into the scene somewhere. Maybe tossed out the window of the van?

Eventually I realized that the composition felt a bit empty in the lower left. What could I add to fill the space? What are things you find in the desert? A vulture? That’ll work. And the vulture can be eating the Footos. Rad. I’ll do that. But it still felt a little empty so I added a second. I would later get called “clever” for slyly referencing Dave Grohl’s side project with Josh Homme and John Paul Jones Them Crooked Vultures. Sure. I was “clever”. Why not. Who knows how the brain works?

The posters would eventually go onsale in December 2020 and sold out in under a day on the Foo Fighters’ online store. My own onsale would follow a day later and sold out nearly instantly.

To be honest Im kind of amazed a poster for a show that never happened and no one was at could sell out as fast as this one did, but its 2020 and people need some Happy. I hope this print helps with that and I cant thank the band enough for another opportunity to work with them. They are a true class act and their hunch paid off. 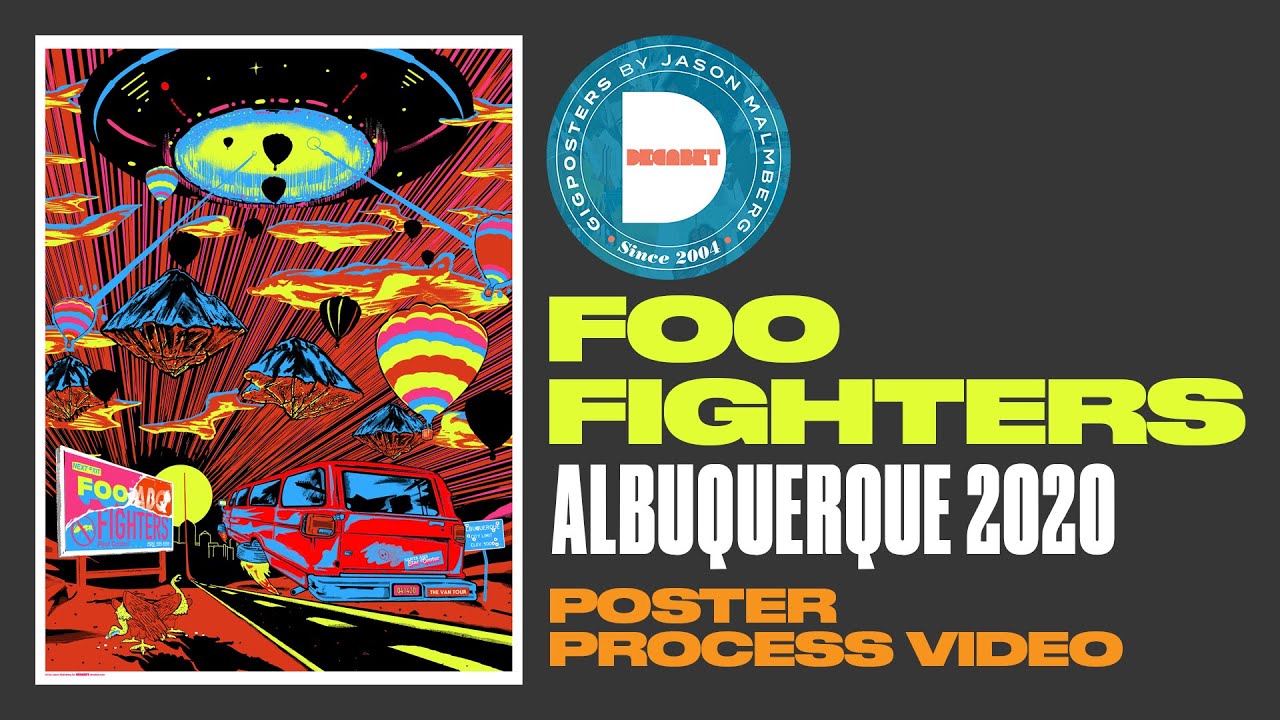 On sale now in our shop

• Each piece individually signed and numbered in a strictly limited edition

Dispatches of note, stout with formidable brio from a weary pen